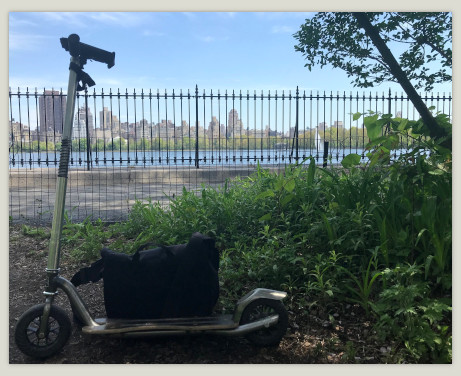 ** I have hit big potholes unexpectedly and almost lost my grip on the handlebars. These grip lock handlebars look cool and solve that problem completely.

Here is how it all began for me with scooters, the New York City Kickped. I had a hip injury, and I thought this would help. I was certainly right! It's equivalent to the California Go-ped in many ways. Chiefly, the Kickped does not have a handlebar break. I never had a problem without a handlebar break - the rear step-on break works perfectly.

My Kickped is a tank. It has been completely reliable. My biggest complaint is the deck screws showed heavy rust after a couple of years. I replaced them with stainless steel screws. Additionally, I put Sugaru clay over the deck screws to protect the deck better. My Sugaru on the deck has held up perfectly for more than a year of use and abuse.

The Kickped has a small footprint at 12 pounds and folds down. It is compact and easy to move around. If you can get around your shame of riding around on something so small, it is a great time saver. Although I have two electric scooters, this classic small kick scooter is sometimes still the best scooter for my task. You do not have to worry about it getting wet, plugging it in to charge, or having it stolen. I have taken it with me on the bus several times to New York City, scooting with it in the bike lanes, sidewalks, and bridges across town.

My biggest complaint was the noise the scooter spring would make when I hit a bump or rode across non-smooth surfaces. People would hear me coming from far away. My solution is to apply a piece of medical tape under the upper part of its folding spring. Doing this alone will reduce vibrations by about 65%. Applying a thin ribbon to the lower part of folding spring will reduce the vibrations by another 20%. It is not a perfect solution but it makes the ride experience so much more enjoyable.

I lost a couple pair of pants from grease and dirt build-up on the spring area and under the deck. You will have to clean this scooter if you intend to fold it up and carry it. If you do not believe me, you will learn the hard way.

Unless you are Captain Applesauce, your top speed is probably about 12mph/19kph if you work hard. Of course, if you are traveling downhill you will exceed my suggested top speeds. Honestly you'll probably be moving between 8-11mph (12-17kph) most of the time.

I do not use a helmet while riding on this scooter. It is the only one I ride that I feel safe enough not to get a serious injury. That being said, I once fell over the front of this scooter, jarred by an unexpected obscenely large pothole in my city's bike lane. Again, this happened once since my purchase in August 2016 and I barely had a scrape.