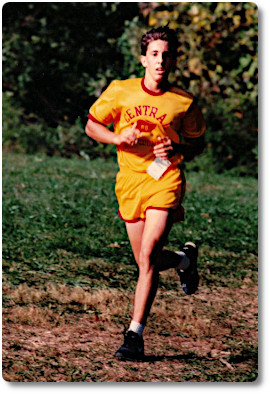 February 19, 2020 - Today I visited our Belmont Plateau in Philadelphia, Pennsylvania. It has been about 25 years since my last cross-country race there and I had not been back - ever. Will Smith and DJ Jazzy Jeff had the huge hit song Summertime, where Will sings/raps about “a place called 'The Plateau' is where everybody goes.” For me, it was always an exciting place – race day. My first running races of my life were all performed there.

I went to a nerd school, Central High School, and I believed people when they said cross-country was too hard. One male student said (and I never forgot), "I tried as hard as I could and finished in last place." I loved to play freedom and tag with my friends when I was younger. I was never the fastest person by far, (I was also the shortest person) but I had the stamina to keep going and going. People would just give up and surrender because they were tired of me chasing them.

My high school librarian would drive me home from school sometimes after our friendship blossomed. We would pass the cross-country runners at practice and I would look at them longingly. Eventually senior year my librarian encouraged me and asked the coach if I could try out. I showed up for the try outs and I did extremely well. I think this was the beginning of not listening to people’s fears and/or worry about their acceptance and trying what I want in life.

I ran my butt off. My coach said, “You get out of cross-country what you put into it.” Of course, I went to the public school that had the best cross-country team in our city at the time. I was right in the middle of the pack – about 11th best of 25 students on the team. I worked my butt off all season. I loved it.

Today lots of lost memories today came jogging into my head as I tried to powerwalk the course with my damaged hip and body. I remember trying to make the best cut around the baseball diamonds to be as efficient as possible. I remember the bathrooms that were closed today. I was always annoyed when people were taking craps before the race hogging the facility before my pre-race nervous pee. I remember the excitement as I first ran into the outer woods, then again a half mile from the finish to do the same final outer woods loop again, then around the baseball diamonds.

I forgot the majesty of Parachute Hill. In my mind is was called Hurricane Hill before I checked… it just went up and up and up. Ha! I also forgot about the part where the course goes down and down and down. There was another hill called Suicide Hill but it was not as bad as Parachute Hill. I loved the smooth gravel trails in the woods. I felt all kinds of nostalgia and I worked my way along the course in the bright late winter sunshine. I threw my arms up in the air I crossed the finish line. All that youth energy and excitement, like when I go to Wildwood, New Jersey, it’s still in there – you just have to find those places that spark it!

After I joined the team, I would run all the time. It came to the end of the season and I wanted the varsity race spot. We had so many good runners at Central High School. I could run for miles and miles and miles, but I could not crack our top 10 runners. At the final practice I kept running and running and running… I cried, telling the coach – you said you get out of cross country what you put into it. I remember some of my teammates laughing lovingly back on the South Lawn saying, there he goes again for another loop. Ultimately, I was an alternate for the varsity race but I did not make it. Everyone was healthy and they did a great job. We won the public school league. I ran in the junior varsity race and I ran okay; I cannot remember much else about it. What I can remember is getting a Central High cross-country jacket. At the end of the season the top 12 runners got FREE varsity jackets for winning the 1993 public high school cross-country league. I thought those running workout jackets were only going to be awarded to the top 10 at the ceremony. I was so happy I earned a jacket my first year running. I still have that jacket today!